What do all the hidden images mean? How do the filmographies of Charade’s two stars factor in? What’s with the strings of random letters? How did all the clues fit together, and most importantly, where is the treasure hidden? 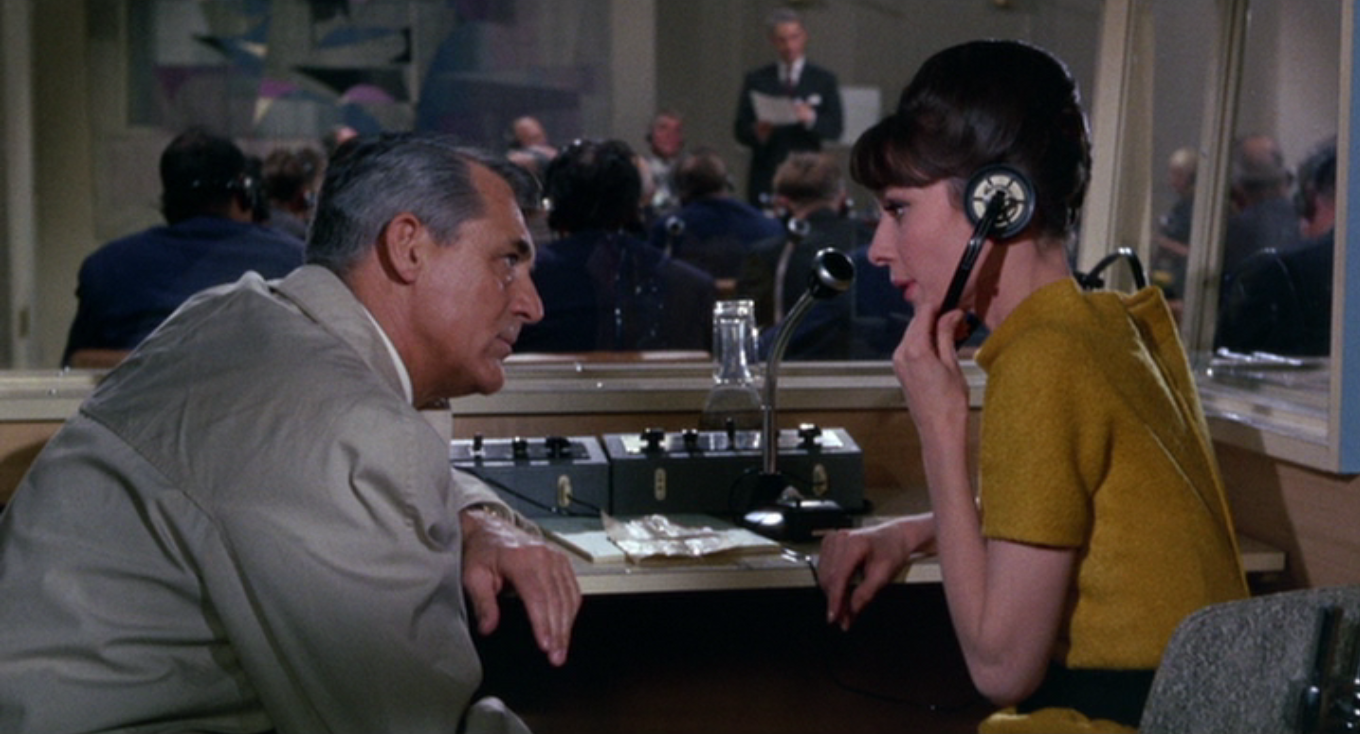 There were many different kinds of clues scattered throughout the Charade videos, including images, music notes, encoded letters, and more. 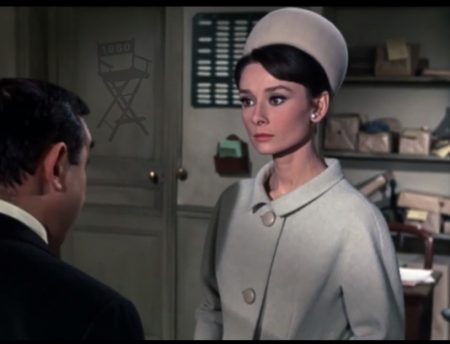 The first three videos of the Charade treasure hunt (1A-2A) each featured an object with a year written inside of or alongside it: 1949 written in a music note, 1960 written on a director’s chair, and 1966 written along a needle and thread.  In order to decipher these clues, we need to consult the filmographies of Cary Grant and Audrey Hepburn. Episodes 2A and 2B each began with a cellphone message that contained a QR code that linked to these filmographies.  If we consult the filmographies, we see that both Cary Grant and Audrey Hepburn each had only one film released in the three years mentioned above; we need to take note of these six films. Each of these episodes also contains confirmation images that relate to the titles of the film. For instance, in episode 1A we find an image of a bridal veil next to an army uniform which confirms that the 1949 Cary Grant film we are looking for is I Was a Male War Bride.

Once we have the films we need to decipher the objects with years written on them. Each of these three objects represents the title of a film crew member: the music note represents “composer/music by,” the director’s chair represents “director,” and the needle and thread represent “costume design.” Now we just need to find the names of the people who held these crew positions for the respective Grant and Hepburn films. Doing so we arrive at the following:

Beginning in the second week we start to see strings of letters popping up in the background of the episodes. At first, we find the sentence “From six last names find a scale,” but then the letters just appear to be nonsense. The key to deciphering these strings of letters comes in episode 3A. Here we find the word “Vignere” as well as a key with AUDREY written on it. These clues let us know that the letters are encoded in a Vigenere cipher and the key to translating them is AUDREY. A Vigenere cipher requires you to “shift” the alphabet a certain number of spaces to find the solution. There are six episodes that contain these kinds of clues and six letters in AUDREY, so to translate these clues we need to shift A to each letter of AUDREY in turn.  The clues in the first episode (2A) do not require shifting, because A = A in the key. However, for the next episode (2B), the key letter is “U” which means we need to shift the alphabet 20 places so that A = U and go on from there.  If we follow this procedure through the last six episodes we uncover a riddle that obliquely guides us through the steps of the puzzle: 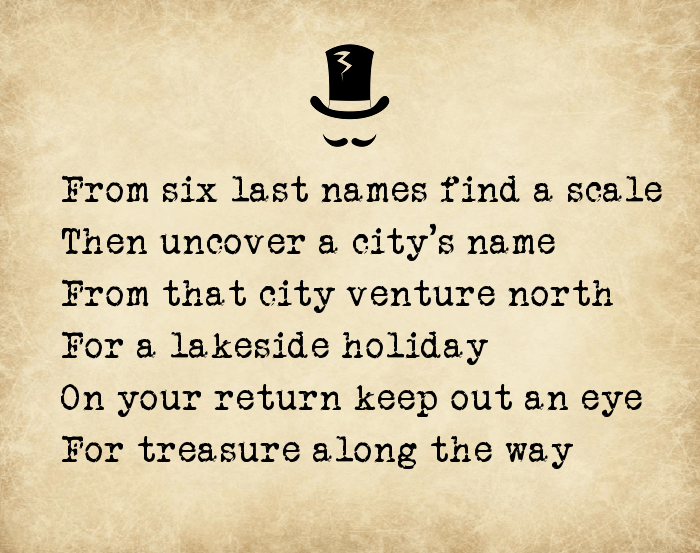 The first line of the riddle “From six last names find a scale,” lets us know that we need to use the last names of the film crew members we uncovered in the first part of the puzzle for our next step. But how? We find a couple of clues in episodes 2B and 3A that indicate what to do next. First, we find “G66, G49, H66, G60, H60, H49” and then a string of numbers “312552.” For the first part, we need to revisit the six films we discovered: G66 indicates the Cary Grant film from 1966, G49 the Grant film from 1949, H66 the Hepburn film from 1966, and so on and so forth. It follows that we need to take the last name of each film crew member and put them in the order of their corresponding films indicated above. Once we’ve done this, we need to take one letter each from the six last names indicated by 312552. For instance, G66 indicates Walk Don’t Run, and we were directed to the costume designer from this film, Morton Haack. We then need to take the 3rd letter from his last name “A,” since his film is first in the list and 3 is the first number in the corresponding string. Completing this procedure we find the following:

Pulling out the letters we find A MINOR, the name of a musical scale as indicated by the riddle. 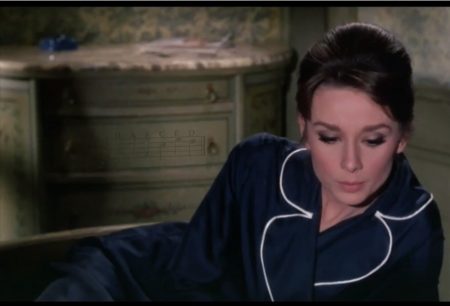 In order to “uncover a city’s name” as the second line of the riddle instructs us, we need to rearrange the letters of A MINOR into the name of a city. Scattered throughout episode 3B are six music notes with each of the six letters of A MINOR written inside of them. Each letter is in a quarter note except for M which is in a whole note.  In the same episode, we find a brief snippet of music with BAFCED written along the top of the staff.  If we take our lettered musical notes and place them in the order that they appear on the staff (starting with the whole note M in the B position) we find A MINOR rearranged into MARION. This is the name of the city we need to uncover, but which Marion is it? Also in this same video, we find a portrait of Abraham Lincoln which indicates that we are looking for Marion, Illinois as Illinois is known as the Land of Lincoln.

But wait, we’re not finished yet! The next two lines of the riddle instruct us to “From that city venture north/ For a lakeside holiday.” This lets us know that we are looking for a second location north of Marion, most likely near a lake. But where? There are a few clues scattered throughout episode 4A that point us toward our next location. First, we see the words G47 – Holiday.  From earlier in the puzzle, we know that “G47” indicates a Cary Grant film released in 1947, and “Holiday” lets us know that we need to determine which holiday is central to this film. If we consult his filmography, we see that there are two Cary Grant films from 1947. Later in the episode, there is a bishop’s hat hidden in the background which indicates that the film we are interested in is The Bishop’s Wife. Looking at a brief summary of this film, we see that The Bishop’s Wife centers around the holiday of Christmas. Also in the episode, there is a hidden image of a mitten roughly shaped like Michigan, the Mitten State. If we put all this together we can determine that the location we are looking for is Christmas, Michigan on the shores of Lake Superior, a literal “lakeside holiday.” 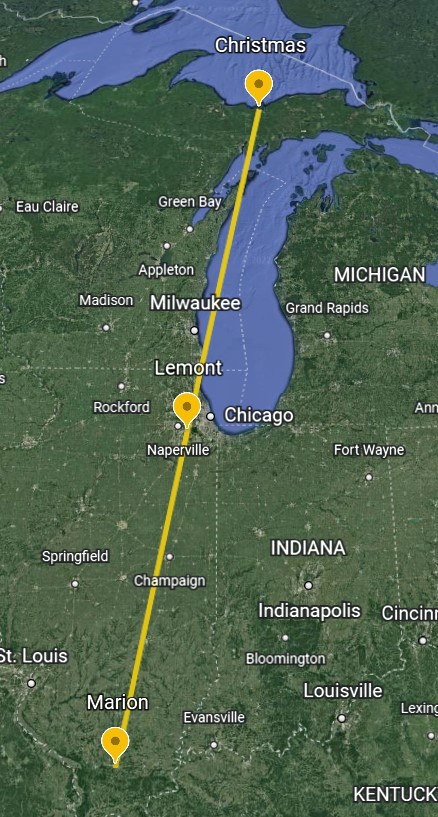 The last two lines of the riddle “On your return keep out an eye/ For treasure along the way,” tell us that the treasure’s location is somewhere between Marion, IL and Christmas, MI.  In order to find out where, we first need to connect the two places using Google Earth or Maps or a different mapping application.  In episode 3B there is a hidden image of a pyramid, which indicates that our starting point is Pyramid Park in Marion, IL.  In episode 4A, there is a hidden image of some oars, which indicates that our connecting point is Paddler’s Village in Christmas, IL. If we measure the distance between these two places we find that they are approximately 612.73 miles apart. There are then a couple of clues in the final episode, 4B, that help us pinpoint the exact location.  Here we find 54.7% written inside a down arrow and a clock that shows 7 o’clock. If you take a look at the map to the left you can see that the direction from Christmas to Marion matches up with 7 o’clock. So we need to calculate 54.7% of the distance between these two places and travel that distance down the path connecting them. 54.7% of 612.73 miles is 335.16 miles. If we travel 335.16 miles down from Christmas we land right in the middle of Lemont, IL on the outskirts of Chicago. This is where our treasure is buried waiting for the winner to dig it up, in Lemont, Illinois!

Throughout the episodes, there are a number of hidden images that give geographic hints, but they are not essential for solving the puzzle. Some of them are obvious, like an American flag and a cluster of buildings representing a town, but a few are a little bit trickier. To the right, we see a mountain with a beret that is in the background of the very first episode. This clue gives a big hint about the treasure’s location right off the bat. The name of the town we are looking for, Lemont, is derived from the french le monte, which literally translates to the mount (as in mountain.) Hence a mountain wearing a beret!

Congratulations to our winners!

Did you solve the puzzle? There’s plenty more adventure where this came from. Register today for the next Brain Chase program, and you could be the next treasure hunter traveling around the world to claim your prize.