I’ve always been a goal-oriented, results-driven person. It’s just my nature. As an adult, I realize I’ve been doing it wrong. 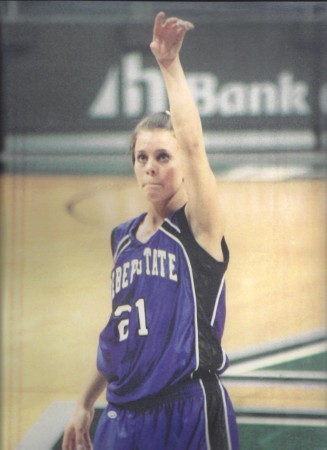 I’m not a psychologist, a therapist, a life coach, nor do I have any real academic training in these areas. What I do have is real-life, hard-knock experience. I’m married to a wonderful husband, and we have five children. I’ve been an athlete my entire life. I played basketball, softball, and track in college. I have extensive running experience and have qualified for and ran the Boston Marathon twice. I also competed on Season 8 & 9 of NBC’s American Ninja Warrior.

Outside of sports, I am a very part-time lawyer and marketer, have played the piano since I was seven, and have a side photography business. I love to read, watch Wheel of Fortune, travel, and play games with my family.

As you can imagine, with a background like that, I’ve spent my entire life trying to reach goals and achieve certain accomplishments. I will always be that way, I am sure. When I don’t hit my goals, it can be really hard on me.

Until recently. Thanks to a lot of self reflection and experience in both success and failure (mostly failure), I’ve learned how to set goals that are truly healthy, positive, and attainable.

Let’s take a closer look at each of these.

1. Make sure YOU have control over the end result. I can’t stress this enough: NEVER EVER EVER EVER set a goal where the results are dependent on someone else’s performance, decisions, opinions, etc. Let me give you an example from my life. My senior year in college, I set a goal to be the MVP of our conference in basketball. I was talented and driven enough to make this happen. But, through a series of events that were out of my control, my playtime my senior year was cut down to a quarter of the time it had been during the previous years. It’s hard to win MVP if you’re barely even playing in the games.

I didn’t win MVP, and I was devastated. It took an embarrassing amount of time for me to move on from that. But, about five years ago, it dawned on me that my goal to be an MVP was a horrible goal. It left too much in the hands of other people. This type of goal could only have been realized if my coach had decided to play me as much as she had in years past. Even if I had played , the committee who divvies out the awards could have selected any other person to get that award for whatever reason. And, even if I played the absolute best basketball I was capable of all season, there just might have been someone out there who was more talented and more deserving. There’s nothing I could have done about that.

So, how could I have set that goal in a more healthy way? I could have focused on things I actually had control over…shoot 100 free throws and 500 shots daily, make 40% of my 3-point shots in a game, get 1 steal for every 5 minutes I was on the court. These types of goals are objective, and I had almost complete control over my ability to reach them. They would not have left me at the mercy of so many other people.

2. Make a plan. I was mountain biking with a friend a few years back. We were at a location known as “the bowl” where you could ride one of several trail options down one side of the bowl and then come up and out the other side on one of many trails. We had ridden the bowl a few times, and I was ready to attempt a harder route. I looked across the bowl, selected a trail I had never ridden before, and took off. That was all the planning involved. As I was climbing up the far side, all seemed fine until I hit the top 18-ish inches, which went from a steep incline to straight up. I didn’t have enough speed and wasn’t prepared to maneuver my bike over that 18 inches. Instead, I found myself back flipping off my bike, falling back down the hill. Luckily, I wasn’t injured.

Had I taken the time to examine the hill ahead of time, I would have known about that 18-inch lip. I would have known to approach the hill with more speed and prepared myself to use my bike and body weight the proper way to make it over that last little lip.

With goals, you’ve got to know what you’re getting in to. Do your research. Talk to others who have done something similar. Make a plan. You’re far more likely to accomplish the goal if you’ve laid out some groundwork ahead of time.

3. Stay focused on the next step. When I completed in Season 8 of  Ninja Warrior, I went out on the very first obstacle, the Quintuple Steps, which is supposed to be the easiest obstacle on the course. Here’s the thing, though. We had been rain delayed twice and all of us who had to run the course early in the night were on a very WET (translation: slippery) course. I made it through four (out of five) steps and began sliding off it. I became so concerned about getting traction, that once I felt I was ready to jump, I sorta haphazardly just went for it…But here’s the problem, I forgot to look ahead to the fifth step before I jumped.

In mid-air, I realized my mistake. I was not headed towards the fifth step, but towards the side of it where there was nothing to grab or land on. I hit the side, fell in the water, and my 2016 American Ninja Warrior adventure was over in all of 30 seconds.

This happens all too often with our goals, too. We get distracted by things going wrong instead of keeping that eagle-eye focus on the next step in our progress. For me, the distraction was rain. But it can come in many forms: naysayers, illness, mistakes, etc. Whatever the distraction, do your best to stay focused on the next step necessary in reaching your goal.

4. Find joy in the journey. I know. It’s cliché. But it’s so true. One of my favorite quotes is attributed to Thomas Edison.  After finally inventing the lightbulb, he is said to have commented, “I did not fail. I just found 10,000 ways that won’t work.” As we work towards our goals, any honest attempt is progress, even if it appears to take us in a direction other than the one we want to go. Look for the learning & positive experiences along your journey. They are there, I promise. 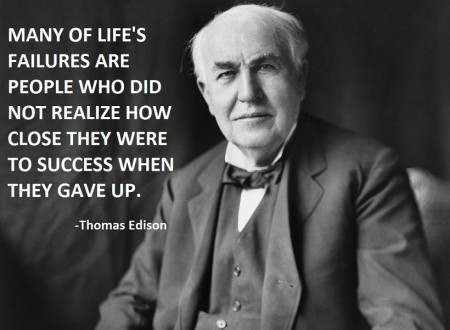 5. Seek excellence, not perfection. For years I’ve been trying to figure out how to put this tip into words. I’ve told many it’s about your efforts and personal growth, not the end result, necessarily. So, if you’re trying your best, you must be satisfied, even if it didn’t go exactly as planned.

Finally, I read a book called “The Birth Order Book: Why You Are the Way You Are,” by Dr. Kevin Leman. His chapter and advice on perfectionism struck a chord with me:

Doing everything perfectly is an impossible task. Your efforts towards reaching your goals will not be perfect. You will mess up and get off track. Life will throw distractions at you. That just happens, and there’s no need to feel discouraged or give up. If you are making an excellent effort and giving your best to make your goal happen, you can be proud of yourself, encouraged, and feel satisfaction, regardless of the outcome.

There you have it, my two cents on goal setting and how to do it right. Whatever you’re aiming for, I wish you the best of luck!

Questions for me, specifically? Email me at Jamie@brainchase.com.